Lawn care, landscaping and snow removal in London, ON made simple

Get a free quote and order

The benefits of working with Eden

Up to date progress

Check the progress of your lawn care and snow removal service with our Eden app on your smartphone or tablet.

Our algorithm combines the cost with your property’s details, providing you with a competitive rate.

What can Eden do you for you?

With no contracts or seasonal fees, Eden only charges for snow removal when you need it.

Our easy, on-demand services cover all of your outdoor yard maintenance and lawn care.

We specialize in landscaping services that fit your personal style and the aesthetic of your home.

What our customers are saying about us

As a property manager who manages dozens of rental properties I can't be more happy with the service. Every crew I dealt with was professional. Great service!!!!

Great app for lawn and outdoor services needed for your home. Super easy to sign up, quick and thorough service and communication. I highly recommend.

I cannot put in words how amazing the Eden App team is! They truly care and want the customer to be 100% satisfied!

How to Treat Patchy Grass

September 28th 2020
Patchy bald spots in the lawn are quite an eye-sore. These bald spots can come as a result of the su...
Read more

How to Improve the Curb Appeal of Your Yard

September 27th 2020
The first impression of your home really matters. Whether you're looking to sell the house or want t...
Read more

How to Compete With Weeds

September 26th 2020
Weeds are what every lawn owner and gardener battle with regularly. These unwelcome plants deprive u...
Read more
Check out the Eden Blog for more tips and tricks. 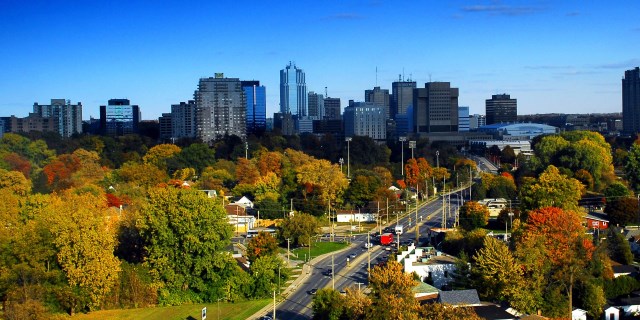 We’re proud to serve London, ON

Welcome to your Eden page for London, ON. Get a free quote and order from top rated contractors in London. Lawn maintenance, snow removal and landscaping companies are available for hire from the ease of your computer and smartphone.

London is a city in southwestern Ontario, Canada, along the Quebec City–Windsor Corridor. The city had a population of 383,822 according to the 2016 Canadian census. London is at the confluence of the Thames River, approximately 200 km (120 mi) from both Toronto and Detroit; and about 230 km (140 mi) from Buffalo, New York. The city of London is a separated municipality, politically separate from Middlesex County, though it remains the county seat.

The area was formed during the retreat of the glaciers during the last ice age, which produced areas of marshland, notably the Sifton Bog (which is actually a fen), as well as some of the most agriculturally productive areas of farmland in Ontario. The Thames River dominates London's geography. The North and South branches of the Thames River meet at the centre of the city, a location known as "The Forks" or "The Fork of the Thames." The North Thames runs through the man-made Fanshawe Lake in northeast London. Fanshawe Lake was created by Fanshawe Dam, constructed to protect the downriver areas from the catastrophic flooding which affected the city in 1883 and 1937.

London has a humid continental climate (Köppen Dfb), though due to its downwind location relative to Lake Huron and elevation changes across the city, it is virtually on the Dfa/Dfb (hot summer) boundary favouring the former climate zone to the southwest of the confluence of the South and North Thames Rivers, and the latter zone to the northeast (including the airport). Because of its location in the continent, London experiences large seasonal contrast, tempered to a point by the surrounding Great Lakes. The summers are usually warm to hot and humid, with a July average of 20.8 °C (69.4 °F), and temperatures above 30 °C (86 °F) occur on average 10 days per year. In 2016, however, temperatures at or above 30 °C (86 °F) occurred more than 35 times, and in 2018, four heatwave incidents led to humidex temperatures topping out at 46 °C (115 °F) . The city is affected by frequent thunderstorms due to hot, humid summer weather, as well as the convergence of breezes originating from Lake Huron and Lake Erie. The same convergence zone is responsible for spawning funnel clouds and the occasional tornado. Spring and autumn in between are not long, and winters are cold but witness frequent thaws. Annual precipitation averages 1,011.5 mm (39.82 in). Its winter snowfall totals are heavy, averaging about 194 cm (76 in) per year, although the localized nature of snow squalls means the total can vary widely from year to year. The majority of snow accumulation comes from lake effect snow and snow squalls originating from Lake Huron, some 60 km (37 mi) to the northwest, which occurs when strong, cold winds blow from that direction. From 5 December 2010, to 9 December 2010, London experienced record snowfall when up to 2 m (79 in) of snow fell in parts of the city. Schools and businesses were closed for three days and bus service was cancelled after the second day of snow.

We are providing more than 20 lawn care professionals in London to make your lawn lusher and greener. Eden’s experts are pro at creating the healthiest lawn that will enhance the beauty of your landscape. Starting of May is the best time to start lawn fertilization in London. Once the grass starts growing, conduct a lawn mowing schedule weekly during the grass growing period. After 3rd week of July, reduce the mowing frequency and schedule grass cutting once in 15 days. Organic weed control methods are the best way to get rid of crabgrass. In the mid of April, apply a layer of mulch to restrict weed growth. After this period, weeds grow rapidly and become difficult to control. While planting perennials, ensure you are completely out of the freeze periods. Our professional’s team is all set to give your weekend back to you. By assisting you with a complete lawn care plan, they will help you create thicker and greener lawn. Along with the lawn care, we offer several services such as landscape stonework, fire features, water features, yard clean-up, etc. You can hire our budget-friendly services for better landscape appearance. So, contact us today and let your lawn stand out in London.

Neighborhoods We Service in London, ON